The following post is written by Karina Solsø Iversen, who is a senior consultant at Attractor in Denmark and a student on the Doctor of Management programme at the University of Hertfordshire. 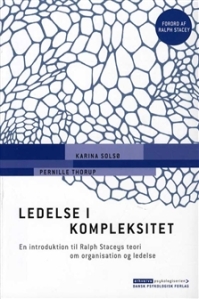 It is a Friday night at7.30. The sun is shining outside in the beautiful garden of Roffey Park Institute which is the location for the quarterly residentials on the doctorate program (DMan) of the complexity and management research group. I sit in the lounge together with my new colleagues whom I have just met a few hours ago. This is my first residential. One of my new colleagues, Mick asks me: What are you doing as a professional? Happy that someone is interested in getting to know me I reply that I work as a consultant. He asks me what I do then. I tell him that I am a process consultant working with organizational development. He looks at me in a mischievous way and asks me once again the exact same question – what do I do then? Somewhat irritated and a bit insecure about what is going on, feeling like I am taking part in a test, I reply that I facilitate conversations between people coming from different departments, professions or hierarchies in order for them to create solutions together. Mick smiles and asks me once again what I then actually do …

A few months ago, my DMan colleague Pernille Thorup and I published a Danish introductory book on complex responsive processes. In Danish it is called: Leadership in Complexity. An introduction to Ralph Stacey’s theory about organization and leadership. END_OF_DOCUMENT_TOKEN_TO_BE_REPLACED

Today’s dominant thought collective[i] of practitioners, consultants and academics concerned with leadership, management and other organisational matters is characterised by thought styles[ii] which, in a completely taken-for-granted way, equate success with positives, sharing, harmony and consensus. Leaders are called upon to communicate inspiring, compelling visions of desirable futures shorn of all problematic features. Followers are to be converted to sharing the vision and committing to the mission so that everyone ‘is on the same page’, ‘singing from the same hymn sheet’, ‘climbing on board’, ‘on the message’ and ‘a team player’. This whole raft of idealisations is taken even further when it is accompanied by a relentless emphasis on the positive aspects of all situations. There seems to be a scarcely-concealed dread of ‘negatives’, such as conflict, and a half-expressed conviction that success can only be achieved when all share the same view, with breakdown as the consequence  of not doing this. If conflict is noticed it is immediately followed by calls for the practice of ‘conflict resolution’ or approaches which rapidly move people from anything negative to a focus on the ‘positives’. A popular example of the prescription for positive consensus is provided by Appreciative Inquiry. Proponents[iii] of Appreciative Inquiry (AI) point to how the dominant approach to leading, managing and changing organisations focuses attention on problems, deficits and dysfunctions. They argue that this approach is demoralising and ineffective in bringing about change and call, instead, for a focus on opportunities and what is working because focusing in this appreciative, positive way raises  morale and promotes generative inquiry. It is claimed that AI generates spontaneous, transformational action on the part of individuals, groups and organisations which leads to a better future. Critics[iv] of AI problematise the focus on positiveness, arguing that positive and negative feelings are intimately connected and conclude that AI is a method whose proponents show little self-reflection or evaluative critique of what they are proposing. In response, Gervase Bushe of the Segal Graduate School of Business has published a paper titles ‘Appreciative Inquiry Is Not (Just) About the Positive’.[v]  Bushe agrees that AI can become a form of repression when it suppresses dissent and focuses on the positive as a defence against the anxiety of dealing with reality. However, he then immediately goes on to say that when AI is used in appropriate ways, which he does not identify, then people do not wallow in mutual pain but tell each other uplifting stories instead, which sooth tensions and release energy. Instead of focusing on conflict, bridges are built between conflicting groups.  In his view, people who want to talk about what they do not like should not be stopped from doing so but they should not be asked to elaborate on these matters. They should be encouraged, instead, to talk about what is missing, what they want more of and what their image of their organisation ought to be. He talks about small group meetings where everyone reads the same story together. Much the same points can be made another positiveness movement called Positive Deviance which is basically an idealised form to ‘benchmarking’ and a sanitisation of ‘deviance’.

This unrelenting emphasis on the positive, on harmony and consensus functions to cover over conflict, difference and real-life attitudes towards deviants because to bring these matters out into the open is to reveal patterns of power relations,  the dynamics of identity-forming inclusion and exclusion and the ideologies sustaining current power figurations. As a consequence, public discussions of organisational life take the form of a kind of rational, positive fantasy that focuses our attention on only a small part of what we ordinarily experience in our daily organisational lives. People continue, as they always have done, to disagree and subvert what they disagree: organisational life is characterised by ongoing conflict in which, at the same time, people normally manage to achieve sufficient degrees of consensus, tolerance and cooperation to get things done together. In order to understand what we are ordinarily engaged in during the course of our daily organisational lives we need to avoid thinking in terms of a duality of consensus and conflict, where we can decide to move from the one to the other, and think instead in terms of the paradox of consensus and conflict: we engage in, we are heavily invested in, organisational games displaying the paradoxical dynamics of consensual conflict or conflictual consensus. END_OF_DOCUMENT_TOKEN_TO_BE_REPLACED